skip to main | skip to sidebar

Blogger Gus van Horn has published an excellent op-ed at Pajamas Media on the topic of the recent Arizona law on illegal immigration. Gus writes:

SB 1070 deserves only one fundamental criticism: It would fail to protect the individual rights of American citizens –even if it hermetically sealed our borders and the police never touched a single American hair in the process of enforcing it. This is because the biggest headaches attributed to illegal immigration are not caused by it at all.

The biggest headaches are the freebies as well as restrictive laws that the government provides and imposes. I commented on the article as follows:

Gus van Horn has it right! I appreciate that most of the people of Arizona are not racist and do not hate Hispanics but the net effect of their law is to impose an unjustifiable burden on anybody who will seem suspicious to the police. The problem, as Gus points out, is the number of freebies our government provides as well drug laws that generate crime, as well as laws that require the provision of services without pay, not illegal immigration as such. The freebies and laws create unnecessary but justifiable resentment. We should work to phase out these items so that no one pays for other people’s education or other service unwillingly and so that our freedoms are no longer restricted. Residency (though not citizenship, which should be a much longer process) should be an option available to all newcomers who want it, barring obvious infectious disease, or other danger to the public such as terrorism.

For a couple more detailed presentations of the rational case for immigration see the following:

Immigration Quotas vs. Individual Rights: The Moral and Practical Case for Open Immigration by Harry Binswanger

UPDATE 4/30/2010 8:20AM:
See also The Rights of Man, the Privileges of Citizen, a very good clarifying on this topic by blogger Jim May of The New Clarion.
Posted by Gideon at 7:59 AM 1 comment:

Those new to Ayn Rand's philosophy of Objectivism are no doubt a bit mystified by the fact that there appear to be two rival "camps" that both claim to represent and promote Ayn Rand's ideas, namely the Ayn Rand Institute, still influenced by founder Leonard Peikoff, and what is now called The Atlas Society, whose senior intellectual is David Kelley. The dispute between the two sides is now over 20 years old and is certainly not easy to understand for new students of Objectivism.

Fortunately, blogger Roderick Fitts of Inductive Quest, has now written a series of essays that clearly, carefully, and in some detail lay out why Kelley is wrong and Peikoff is right. He has written four parts so far:

Closed vs. Open Part 1: Introduction, and the Issues

Part 2: The History of the Dispute, and the Closed and Open Systems

I think these essays will be useful not only to newcomers but experienced Objectivists as well because they do an excellent job of clarifying and concretizing the issues involved. As someone who has at various points in time struggled with these issues, I highly recommend this series of essays.
Posted by Gideon at 5:57 PM 4 comments: 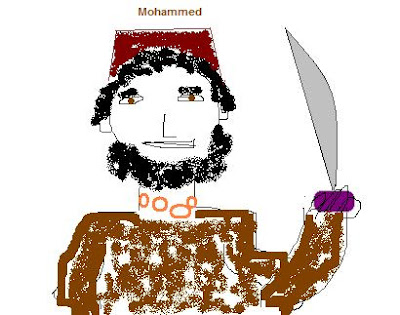 For the record, I really hate South Park, but the producers of the show, like everybody else in this country have the right to express themselves without intimidation, including about the subject of the alleged prophet Mohamed. That is why I support Everybody Draw Mohammed Day. See also Ari Armstrong's arguments for a further defense. Above is my entry.
Posted by Gideon at 8:14 AM 2 comments: